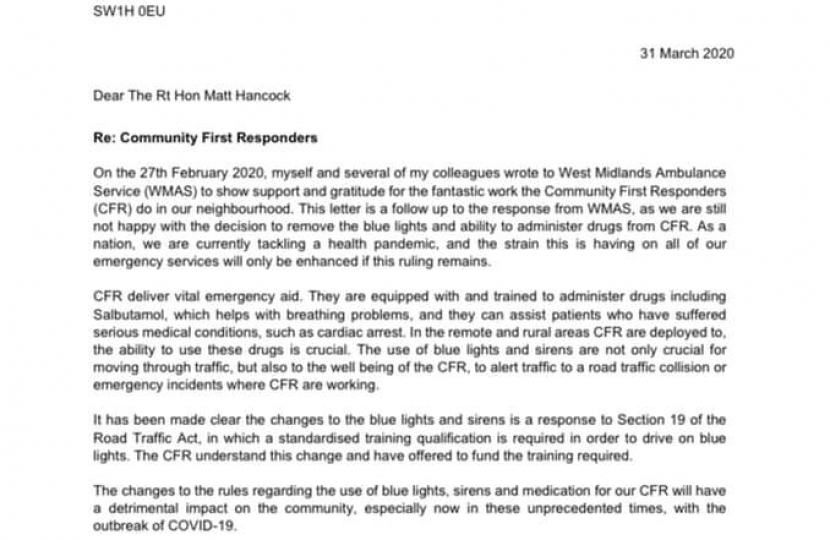 Last week, Jonathan Gullis, Member of Parliament for Stoke-on-Trent North, Kidsgrove and Talke, signed a letter alongside five other MPs backing the amazing work Community First Responders (CFRs) do in our neighbourhood.

The letter was a follow up to the decision by West Midland Ambulance Service (WMAS) to remove access to blue lights and the ability to administer drugs from the CFRs. Championing the NHS and improving services within Stoke-on-Trent are some of the issues Jonathan committed to delivering when he become an MP. The CFRs are a fundamental aspect of these services, and this decision, especially with the outbreak of coronavirus, will only put a further strain on the Health service and have a detrimental impact on the community.

Jonathan said “My local Community First Responders play a critical role in protecting and saving the lives of residents across Stoke-on-Trent, Kidsgrove and Talke as well as the wider Staffordshire area. So, I struggle to understand why the decision has been made to remove the ability to those CFR to use ‘Blue Lights’ when on the way to administer health support to some of the most critically dangerous patients.”

These changes came into effect from 1st April 2020. In a letter from Nick Henry, an assistant chief ambulance officer with responsibility for CFRs, the drugs were to be returned and any costs incurred from the removal blue lights/sirens would be met by the Trust.

Theo Clarke, Member of Parliament for Stafford added, ““Community First Responders are a vital part of our health infrastructure and many lives have been saved because of their early intervention. We should be doing all we can to enhance their service in Staffordshire. I will continue to make this case to the Government.”

The letter was sent to both WMAS and the Health Secretary to demonstrate support for CFRS and that this decision would not be in the national interest.