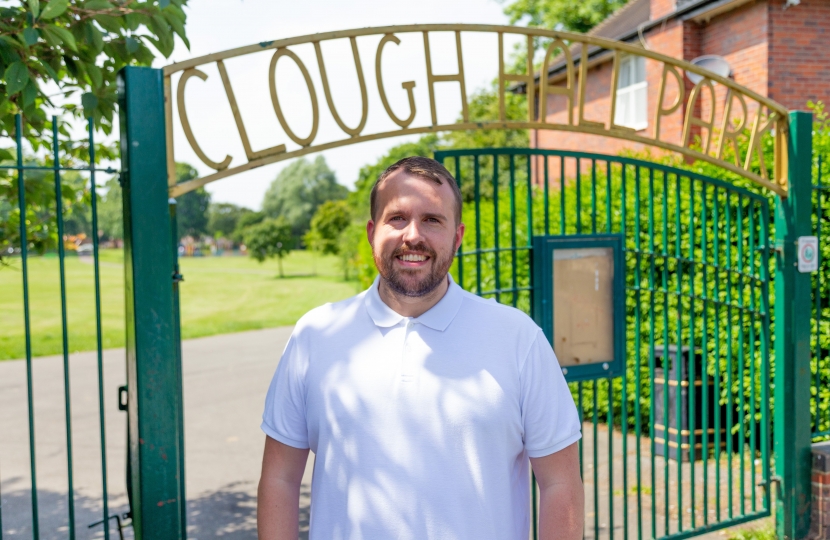 It was reported by Chief Inspector Clair Langley that anti social behaviour had dropped by 18% in the past 12 months. This outperformed the Borough wide area, which was down 12% over the same time frame.

Members of the public still have concerns over the safety, particularly of young people, based on recent stories highlighted in the local press.

Jonathan followed the public meeting by arranging a visit with Staffordshire Police Fire Crime Commissioner, Matthew Ellis, where Jonathan raised the community’s concerns from the meeting.

“I am in the process of arranging a meeting of my own with the local community in Kidsgrove & Talke. Residents concerns over anti social behaviour is always taken seriously. I consider what the police to be doing in Kidsgrove, to be proportionate. The visibility of Police Officers is crucial, more Officers have been recruited and I would expect to see visibility increase within the local area.”

Jonathan has now written to Cllr Waring to see if Newcastle-under-Lyme Borough Council will conduct a survey to get feedback across the local Kidsgrove and Talke community, which can then help set local police priorities.

Jonathan also wants to see the return of a local community group, ‘Friends of Clough Hall Park’. Jonathan encourages anyone who would be interested to contact him via his e-mail, jonathan@jonathangullis.com.

“I would like the thank our hard working local police officers. Their hard work ensures we are kept safe and I thank Chief Inspector Langley and PC Davies personally for meeting with the local community last week.

“It is encouraging to hear from the police that anti social behaviour is down across Kidsgrove and Talke. It is a superb place to bring up your child and the sense of community spirit in inspiring.

“I am hoping to bring together community champions to help restart the ‘Friends of Clough Hall Park’. Over recent weeks we have seen the negative news stories, but I believe this group can be a force to turn a negative into a positive. I hope members of the community will join me in creating a ‘Friends of Clough Hall Park’, to show the very best of Kidsgrove and Talke.” 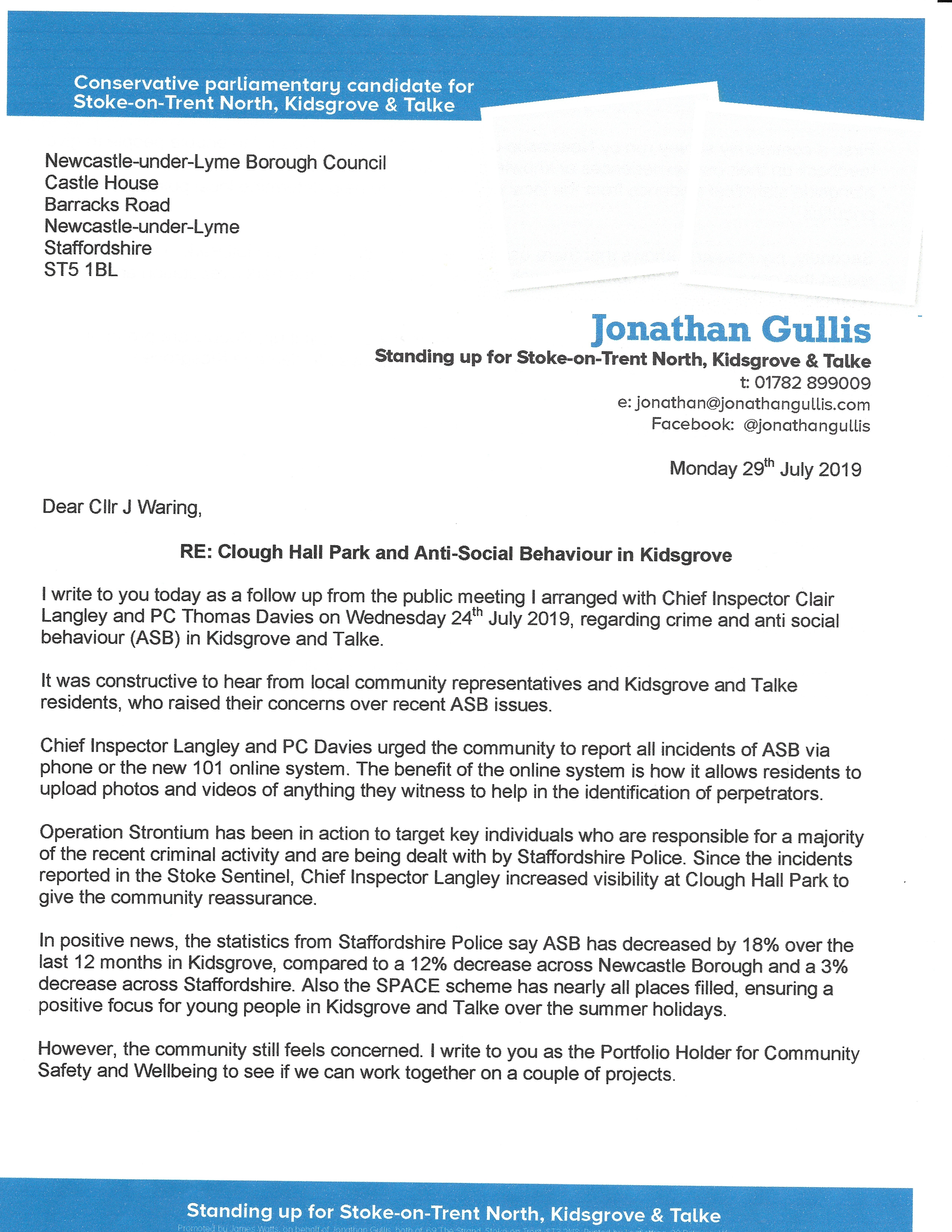 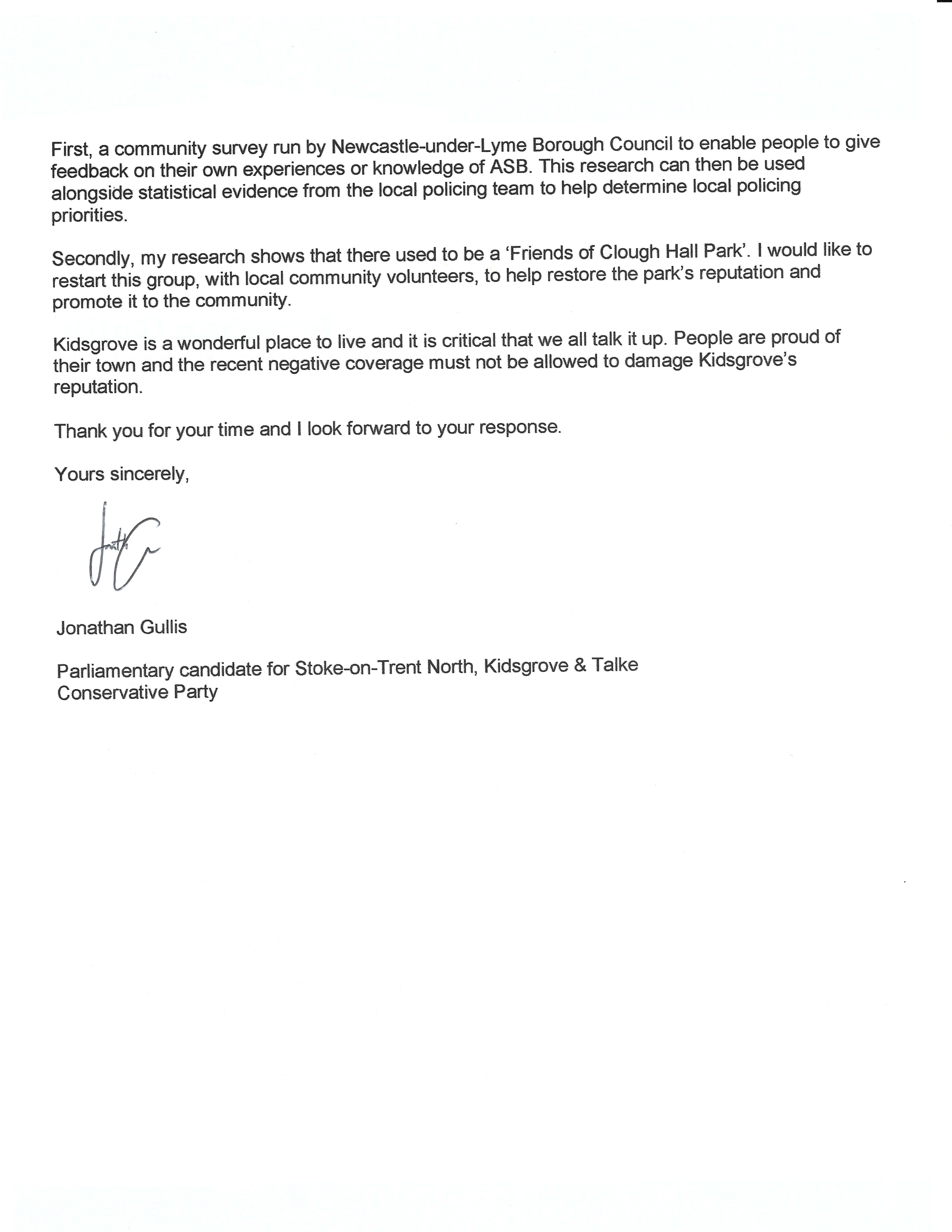